Grand opening of the Slovak branch of AfB 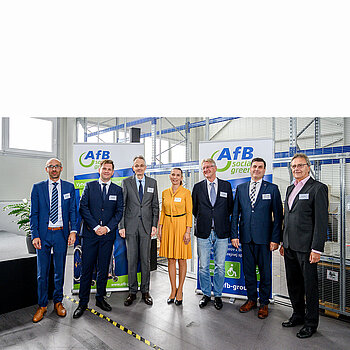 Grand opening of the Slovak branch of AfB.

On September 25, 2019, the grand opening of AfB Slovakia s.r.o. in Trnava took place. Entering the Slovak market is an important milestone in the strategy of AfB's expansion in Europe. Since the official registration of the company in January 2019, 8 people have found an interesting employment here - 6 of them with disabilities.

Prominent guests at the opening ceremony

In total, about 50 personalities from the fields of politics, economics, non-profit organizations and the media accepted the invitation, this gave them the opportunity to get acquainted with the activities and benefits of the non-profit organization AfB. The initial welcome by AfB Slovakia CEO Marek Antoňák was followed by speeches by prominent guests. Gradually, Branislav Ondruš, State Secretary of the Ministry of Labor, Social Affairs and Family, Eva Nemčovská, First Deputy Mayor of Trnava, Peter Primus, Permanent Representative of the German Embassy in Slovakia, and AfB Founder Paul Cvilak, introduced themselves.

Regional cooperation with the city of Trnava

As part of the grand opening, the city of Trnava signed a memorandum with AfB Slovakia on regional cooperation in areas that support the employment of people with disabilities. At the beginning, AfB Slovakia will donate 6 refurbished notebooks to social daycare centers for elderly citizens in Trnava.

During the subsequent inspection of the operational part of AfB led by the operational director Dávid Mick, the guests got acquainted in more detail with the individual processes and activities in AfB. The rest of the time was spent in the spirit of conversations and making acquaintances with potential partners for future cooperation in the field of IT. Guests from the economy included, for example, Radovan Vaško (T-Systems Slovakia), Pavol Mirossay (Košice IT Valley), Ernest Salzer (CSI Leasing Slovakia), Dalibor Jakuš (Managing Director of Professia.sk), Elena Kopcová (Tenenet), Jozef Ondáš (Empirica), Alexander Leontiev (Ecoplus International Slovakia), Mária Berithová (Slovak-Austrian Chamber of Commerce), Christian Kügerl (Commercial Advisor of the Austrian Embassy) and many others.

back to overview
You have to allow the category Personalization.
Open cookie-settings
Cookie settings

We use cookies to optimise your website experience. This includes cookies that are necessary for the site to function and to manage our commercial corporate goals, as well as those that are only used for anonymous statistical purposes, for comfort settings or to display personalised content.

You can decide which categories you want to accept. Please note that not all functions of the website may be available due to your settings.

These cookies are necessary for the operation of the site and enable, for example, security-related functionalities.

In order to further improve our offer and our website, we collect anonymised data for statistics and analyses. With the help of these cookies, we can, for example, determine the number of visitors and the effect of certain pages of our website and optimise our content.

We use these cookies to make the site easier for you to use. This enables us to recognise whether you need assistance and to provide you with a customer service representative via a chat.